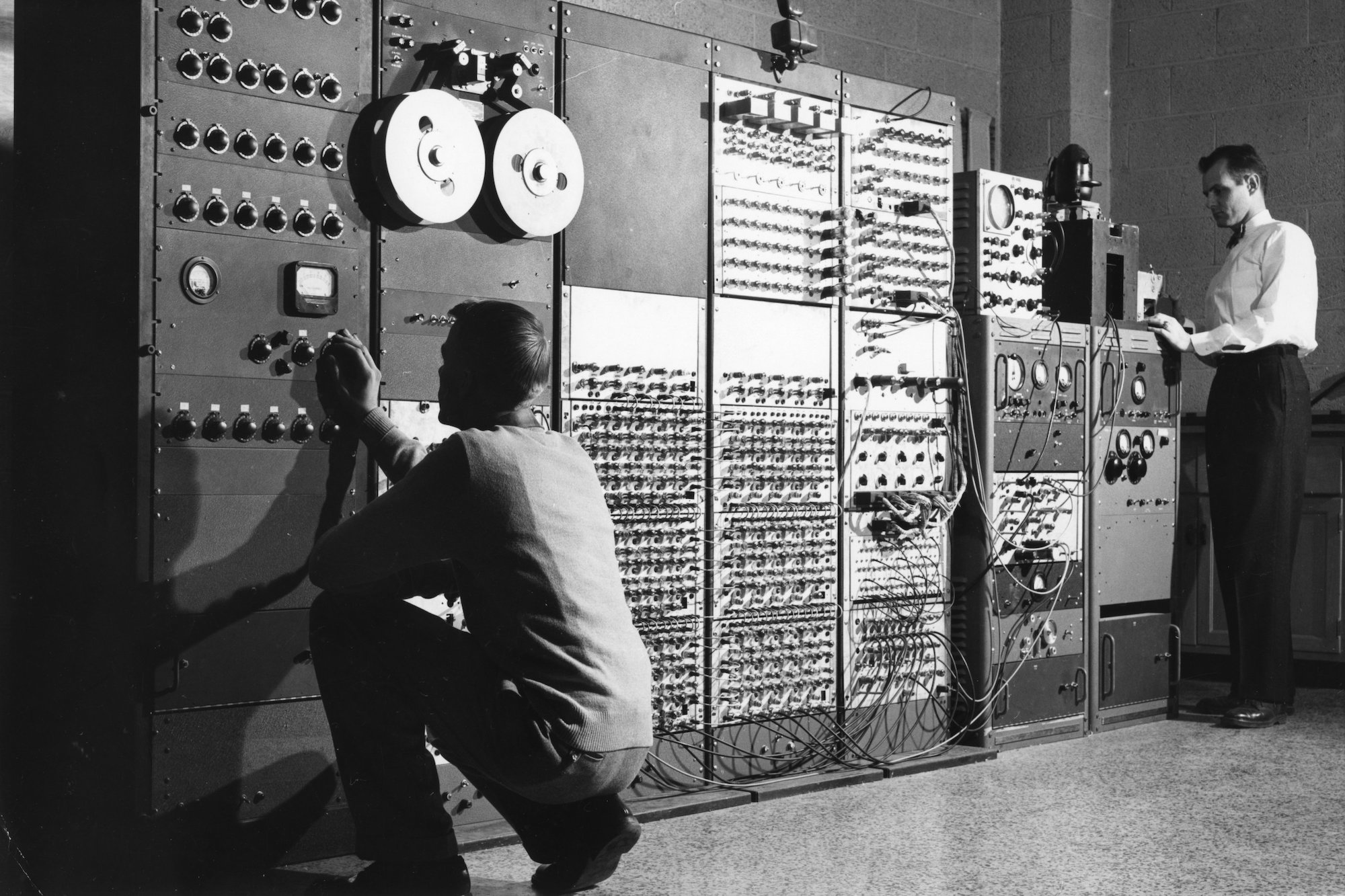 When we think of computers, we think of the twenty-first century. But did you know that India started using them back in the 1950s?

Computers were the unexpected secret sauce for accelerating India’s economy after Independence. The government used them to process massive amounts of data and generate complex statistical models of the economy.

How did the Indian government start using big data over half a century ago, long before big data was even a thing? And how did P. C. Mahalanobis, a physicist by training, come to be at the center of this transformation? Keep reading to find out.

Mahalanobis received two physics degrees (first from Presidency College, Calcutta, and then King’s College, Cambridge) and then spent 16 years as a physics professor. However, a chance encounter rerouted him to statistics and forever changed India.

After graduating from Cambridge in 1915, Mahalanobis accepted a job with the Cavendish Laboratory in Cambridge’s physics department. Before starting the job, he planned a short vacation back to India. His voyage back was delayed by World War I, so he spent the extra time browsing through books in the college library.

While he was there, a tutor named Macaulay happened to find him and asked for his opinion on Biometrika, a scientific journal on theoretical statistics. Mahalanobis was immediately fascinated. He bought every Biometrika issue ever published and read them on the voyage back to India.

After arriving, he decided to stay in India and joined Presidency College as a physics professor. In his spare time, he continued to study statistics and tried to apply it to any problem he could find.

This was the turning point in Mahalanobis’s career. If he returned to Cambridge, he likely would have been a remarkable physics researcher. Instead, he stayed in Calcutta, where his network of liberal family, friends, and even the Nobel-winning writer Rabindranath Tagore encouraged him to pursue the new field of statistics.

Mahalanobis and India lead the way in statistics

At the beginning of the twentieth century, modern statistics was virtually unheard of in India. No universities did research or classes on it, and no scientific journals covered it. Mahalanobis set out to change this.

After a decade of statistical experiments and side projects, he and two other professors established the Indian Statistical Institute (ISI) in 1931. Two years later, he founded Sankhyā, a statistics journal that quickly became popular globally.

Sankhyā shows the intimate connection which has existed for more than 3000 years in the Indian mind between adequate knowledge and number. As we interpret it, the fundamental aim of statistics is to give determinate and adequate knowledge of reality with the help of numbers and numerical analysis.

The ISI quickly became India’s top institute for statistical research. Along with undergraduate students, it also trained people sent from the then-British government in India.

In the 1930s and 40s, the ISI took on government and private projects to measure and forecast everything from floods and crops to consumer expenditure and public opinion. Mahalanobis used these projects to test his ideas on how to collect data “expeditiously, economically and with a reasonable degree of accuracy”.

He quickly published pioneering work on sample surveys, including how to rigorously design them, organize fieldwork, and tabulate results. He also introduced core statistical concepts still in use today—including randomization, multivariate analysis and fractile graphical analysis.

No technique of random sample has, so far as I can find, been developed in the United States or elsewhere, which can compare in accuracy with that described by Professor Mahalanobis.

Just before Independence, Mahalanobis and the ISI’s work attracted worldwide attention and fame. News of statistics’ power and importance spread like wildfire through India’s economic circles. Little did anyone know that in just a few short years, it would move into the heart of the newly independent government.

After Independence on August 15, 1947, the Indian economy was off to a shaky start after two hundred years of colonial rule. To fix this, the government set up the Planning Commission (now the Niti Aayog) in 1950. Its purpose was clear—kickstart development and strengthen the economy.

The Planning Commission immediately created the first Five Year Plan. Launched in 1951, the plan allotted about ₹2 crore (over ₹150 crore or $20 million today) to help grow the country’s industries, economy and income.

The Planning Commission hoped to increase GDP by 11 to 12% within five years. But in what came as a welcome surprise, GDP had grown by over 18% by 1956. The first Five Year Plan—and the broader idea of central economic planning—was a clear success.

Bringing the ISI and statistics into governance

The ISI has taken the lead in the original development of the technique of sample surveys, the most potent fact-finding process available to the administration.

The success of the first Five Year Plan inspired the independent Indian government to think bigger. In the early 1950s, the government made Mahalanobis the country’s first Statistical Adviser, and the ISI officially took up two massive projects.

The first was to direct the new National Sample Survey (NSS) and tabulate the results. The government needed this data to come up with national income and other key indicators, which would show whether their economic plans were actually effective.

Second, the ISI was formally inducted into the process for creating the country’s next Five Year Plan. Mahalanobis wrote the first draft of the plan, based on the Mahalanobis model of centralized planning and rapid industrialization. This became the base for the second Five Year Plan (1956-61).

Mahalanobis’s plan required the government to constantly adjust its investment between sectors based on industry trends and health. This relied on a mathematical model of the entire economy, based on every sector’s input and output.

The government had massive volumes of demographic and economic data pouring in from the NSS every month. This data held the key to finding crucial economic trends, but no one could keep up with it. Of course, Mahalanobis had a solution—computers.

Computers were incredibly new at the time. The first digital computer, the Electronic Numerical Integrator and Calculator, was built in 1943-44 at the University of Pennsylvania.

By the early 1950s, a few governments were exploring the idea of integrating these early computers into governance, but it was often for military goals. Instead, Mahalanobis saw computers as the key to planning.

We must proceed with electronic computers with all possible speed. Otherwise we will never be able to cope with the tremendous volume of primary information which is accumulating… I know that real planning would require the use of such computers.

In his mind, computers were the solution to liberate governments from the limits of human computation speeds, and thus liberate independent India from underdevelopment.

It was easy enough for Mahalanobis to say that India needed a computer. But getting one was much harder.

Computers were brand new, massive and only available abroad—which made them notoriously expensive. For example, the UNIVAC computer used by the United States Census Bureau cost over $1 million (about $9 million or ₹68 crore today), plus an additional $200,000 per year for maintenance.

Mahalanobis knew he had two options for getting the Indian government a computer. They could import one, though cost would be a challenge. Or they could build one in India, which was technically difficult.

Mahalanobis started pursuing both options at the same time. Starting in the early 1950s, he spoke to countless American, British, Soviet and international organizations, asking for money and technical help. However, he ran into one polite rejection after another.

Meanwhile, the ISI opened an experimental lab in Calcutta to build a computer in India. In 1953, they successfully completed India’s first computer, built with salvaged materials from the disposal depots of Calcutta’s Chandni Chowk market.

However, this was an analogue computer—a small machine only capable of solving simultaneous linear equations of up to ten variables. It was much less powerful than digital computers, and it couldn’t handle the government’s economic equations. The ISI soon started trying to build a large-capacity digital computer, but the plan was quickly scrapped.

Mahalanobis had a breakthrough in 1954, when he used Cold War tensions to provoke a conversation with the USSR (Union of Soviet Socialist Republics).

In February, Mahalanobis was asking the Soviet Ambassador Menshikov whether they could help India develop a digital computer. He provocatively said, “Surely the USSR can have no objection in giving and teaching us things which are known to the Americans.” Menshikov replied with a laugh and told him to submit a proposal.

Eight months later, the USSR and United Nations agreed to fund the purchase of a digital computer—the HEC-2M from the British Tabulating Company. Mahalanobis knew the computer wasn’t powerful enough to handle government data. However, he thought it was still valuable for helping the ISI and Indian government learn how to use and maintain a computer.

Manufacturing, shipping and installing the computer took nearly a year, in part because it arrived unassembled with no manuals. But finally, in 1956, the HEC-2M was installed at the ISI (on loan from the Government of India). This was the first digital computer not only in India, but also in mainland Asia. The ISI excitedly started using it to process NSS data and do calculations for ISI divisions and scientific institutes across India.

Two years later, the Indian government got a second computer—the URAL computer from the USSR. Unlike last time, this computer came with detailed manuals… but of course, they were in Russian. Thankfully, the USSR also sent 8 engineers to help set it up.

In no time, the ISI’s computer division had 30 people working full-time to crunch NSS data and create optimal economic plans for the Planning Division.

The Humans of Data behind modern India

Planning in India had been synonymous with technological advance. It had, in fact, paved the way for a digital modernity in South Asia.

Long before today’s age of technology and data, Mahalanobis and his fellow Humans of Data in the government and ISI showed the world what it looks like to think big.

They helped grow a new discipline from the ground up, built innovative technology from salvaged scrap parts, and hacked and hustled their way to a better nation—powered by data at every step.

Author’s note: This article has been written with great love and care, after extensive research. As with many historical events, there could be many interpretations of a story. If you see anything that appears to be incorrect or have a different perspective to share, please leave a message in the comments below.

Another note: This article owes thanks to Nikhil Menon, whose fascinating article “‘Fancy Calculating Machine’: Computers and planning in independent India” unearthed Mahalanobis’s role in bringing the first computers to India. We highly recommend the article to anyone with access to the archives of the Modern Asian Studies journal. How the Ancient Egyptians Built the Original Skyscrapers with Data How the Humans of Data Landed Man on the Moon